CONFERENCE OF DEANS OF DENTAL SCHOOLS OF AFRICA

The African Society of Dentistry and Implantology (ASDI) has organized in partnership with the Dental Schools of Rabat and Casablanca in Morocco on the 31st of January and the 1st of February 2014 the first Conference of Deans of Dentals School of Africa (CDDSA).

This unprecedented continental event also saw media coverage of audiovisual as well as national and international written press. During this conference, the ASDI has been designated by statute as an associate member of the CDFMDA and the AJDI as the partner, and media and scientific support of the conference.

The CDFMDA is the representative structure of university and clinical dentistry of the continent. It constitutes a force of reflection, proposal and political decision in matters of training, health care and research in the field of dentistry within official public instances, private professionals and national and international ordinals.

With the same perspective, one of the resolutions of the first edition of the CDDSA organized on January 2014 in Marrakech was the organization in partnership with the ASDI the first edition of the African Congress of Dentistry and Implantology (ACDI 2016) and also the African Dental Exposition (ADE 2016) from the 26th to the 30th January in Marrakech.

The 2nd edition of the CDDSA was held in Marrakech on the 29th of January in parallel with the ACDI 2016. It welcomed new members and has seen the signing of partnerships between the members of the CDDSA which will strengthen the exchanges and links between the African dental schools.

A new board has been elected presided by Pr. Tarek ABBAS (Egypt) and Cairo, Egypt, a great African country and nation and home to the first dental schools in Africa was the guest of honor of the ACDI and ADE 2018 which was held on October 2018.

During the 3rd edition of the CDDSA, which was held on October 26th 2018, a new board was elected presided by Pr. Fethi MAATOUK, Dean of Dental School of Monastir. Tunisia will have the immense honor and pleasure to host the 4th Conference of Deans of Dental Schools with its 42 dental schools represented by their respective Deans coming from over 20 African countries on April 10th 2020 alongside the ACDI and ADE 2020. 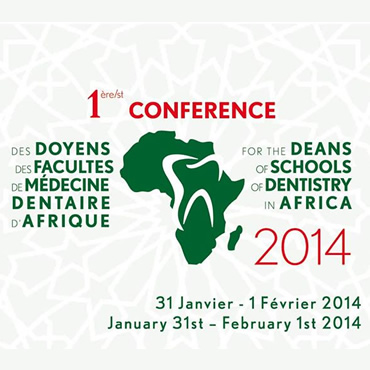 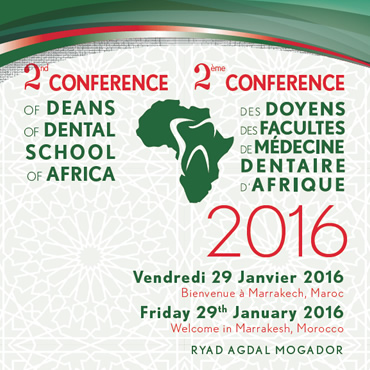 2nd conference for the deans of schools of dentistry in Africa